With the formal departure of Moira Kelly AO from Children First, we’re proud to unveil our new visual image.  Foundation Chairman Roger Langley introduced the new logo to guests at our Gala Ball on Saturday night. 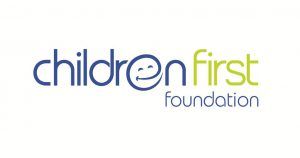 Moira Kelly stepped down from her active role with Children First in 2011 and for a short time assumed the role of a Principal Ambassador.  At the Foundation’s Annual General Meeting in 2013, Moira stepped down as a Director, and shortly after ceased acting as an Ambassador.

Moira is now undertaking new projects and it has been understandably confusing for both parties, and their supporters, for her name to remain within Children First’s logo and identity.

Moira’s vision inspired the formation of Children First Foundation which was established in 1999 to support and expand her humanitarian work.  She played an active role, supported by volunteers, in caring for children and overseeing the medical evacuation of international children to Australia until her departure three years ago.

Since then Children First’s work has continued and grown, this year celebrating 15 years of transforming the lives of disadvantaged international and Australian children, supported by surgeons, hospitals and health professionals, donors and volunteers who contribute to the Foundation’s programs.