2014 Season’s Greetings from the children and all of us

Season’s Greetings and thank you for your continued support.  We’ve had so many highlights this year, we’d love to share some with you.

Asha, Rongino and Flora returned home to Tanzania in early January and Donation and his mother arrived at the end of the month.  After a short stay at the Farm they travelled to Adelaide for cranio-facial surgery and returned home to the Solomon Islands in March.

Kingsford headed to Cabrini for further surgery in January and thanks to surgeons Paul McMurrick and Chris Kimber and the Cabrini team he returned to PNG in April able to lead a normal life. 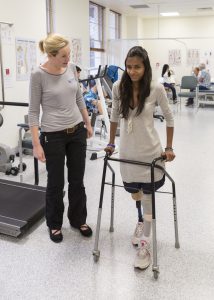 In February we welcomed Kashmala from Pakistan, a victim of a bomb blast five months before.  Leo Donnan operated at St Vincent’s Private in May, repairing damage to one leg and preparing her other leg to be fitted with a prostethic.  She’s shown great determination and is now walking without a crutch.

Gift arrived in March with his aunt Rebecca.  Urologist Chris Kimber operated at Monash Children’s and after extensive outpatient treatment Gift was able to return home in October.

March was a busy month with both Margarita and Jhonny having major surgery on the same day!  Margarita was at Cabrini with Michael Johnson and team, and Jhonny at Dandenong Hospital with James Leong and Chris Xenos and their team.

Margarita had arrived from East Timor in November 2013.  She had an extreme deformity of the spine, the result of having had TB.  Margarita was underweight when she arrived so the team at the Farm set about addressing this, and did so successfully.  The surgery was extremely delicate with the potential to cause more permanent damage, requiring careful post surgery care at our Rehabilitation Home.  It was wonderful to see this lovely young lady standing tall with her straight back. She returned home to a great welcome in September.

Jhonny had a massive facial disfigurement caused by a fronto nasal encephalocele.  Jhonny was from the Philippines and was referred to us by Interplast.  When he was ready to return home we held a media conference at the hospital where he loved the attention and charmed the TV crew. 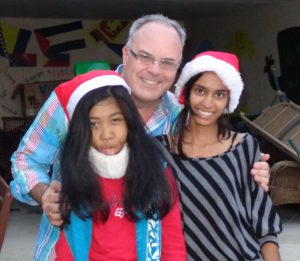 Theresa and Kashmala with board member Don Maloney

Theresa, also from the Philippines arrived in June.  She had terrible disfigurements from burns she sustained eight years ago, at the age of eight.  She underwent several surgical procedures to release the contractures with Assoc Prof Peter Haertsch at Concord Hospital in Sydney before returning to the Farm into the care of Pat and Michelle for post surgery care and intensive physiotherapy.  The physio team from St Vincent’s offered fabulous support with weekly physio at the hospital and staff visiting the Farm once a month.  The change in Theresa is astounding – she’s worked so hard and pushed herself to exceed all targets.

Dung and Thong arrived from Vietnam in June – each had crouzons syndrome and went to Adelaide for surgery.  Dung went home in October and Thong is currently at the Farm until he returns to Adelaide Women’s & Children’s for more surgery in January.

And Dorcas arrived from Zambia in July to be assessed for orthopaedic surgery.

August was a month for ‘goodbyes’.  Gerry and Sevelina returned to Tanzania, followed by Job a few days later.  Job had returned to us from Naura earlier in the year for the second stage of his cleft palate repair with David Chong at St Vincent’s.

Our most recent arrival is Yafi from Indonesia.  Soon after arriving he had surgery at St Vincent’s to remove a tumour pressing on the nerves to his eyes and will have further surgery in a month.  He has already lost the vision in one eye and it is hoped this surgery will save the remaining vision in his other eye.

Last but not least – Motaz! He’s been with us since February 2013.  His legs were bowed as a result of rickets and presented surgeon Leo Donnan with some challenges in terms of planning his treatment.  He will soon return home with lovely straight legs thanks to Leo and the team at St Vincent’s.  He’s such a character he has his own photo gallery!

This year Theresa, Motaz, Kashmala, Dorcas, Yafi and Thong and his mum will be with us at the Farm on Christmas Day before heading to Mornington for a ‘sea-change’ thanks to the generous hospitality of the parish of St Macarthin’s.

Our Australian program, Between the Gaps, provides financial assistance to disadvantaged Australian families with disabled or chronically ill children needing mobility aids and services that they are unable to access.

In 2014 we assisted 72 families, with many new referrals from Melbourne’s population growth corridors to the North West and South East.  On average the program contributed $2000 per case, a significant amount for families to find themselves when they are already challenged by day to day living expenses.

We know that the financial, emotional and physical strains on families who are caring for a chronically ill or disabled child can be factors in family breakdown and dislocation. Making it a little easer for families by providing funding for a child’s medical needs can sometimes make all the difference.

As this important and incredibly worthwhile program continues to grow, we are seeking further funds to be able to continue to support as many Australian families as possible who currently fall between the gaps. 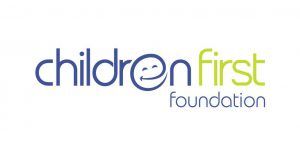 Our new – ‘refreshed’ – logo was unveiled at our Gala Ball in November.  Although Moira Kelly AO had left Children First three years ago, her name had remained in our logo.  With her formal departure from the Board of Directors in 2013 a change to the logo was recommended.  You can read more about this on our Public Statement.

We were thrilled to welcome three new Ambassadors to Children First this year.

Diane Dunleavy and Peter Stubbs, better known as radio legends Grubby and Dee Dee have given us great support in the past, and this year enthusiastically agreed to be Ambassadors.  Grubby and Dee Dee present weekend summer listening on Melbourne radio 3AW.

Melissa Hetherington also embraced the position of Ambassador with great enthusiasm.  She hosted our Gala Ball in 2013 and was an absolute hit.  She generously agreed to be our host again this year, despite being very pregnant.  Melissa and husband Matt welcomed Oscar’s baby sister Madeline Rose two weeks later!

Students and schools making a difference

Children First has always had great interest and support from schools and this year has been no different. There are far too many schools to list here (they are all listed in the schools section on our website) but we can mention just a few.

Resurrection Primary School has a novel way of raising money – the children have a coin trail and each class competes to have the longest trail!

Emmaus College sponsored a child in 2012 and raised further funds in 2013.  They have already embarked on plans to sponsor another child in 2015.

St Monica’s College at Epping has become famous for its Cup Cake Day! The college also has a major fundraising dinner and will sponsor another child next year.

And we must acknowledge our Kilmore neighbours, the VCAL students at Wallan College for their support!

‘Thank you’ from the CEO 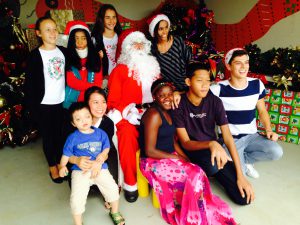 As another busy year comes to a close at our Kilmore Rehabilitation Home and our North Melbourne office we take this opportunity to thank our supporting surgeons, medical, nursing and allied health professionals and hospitals for their dedication and the generous humanitarian skills and resources they provide.

Our volunteers at Kilmore continue to give care and support to the children and the contribution from our Patrons, principal sponsors, donors, corporates and service clubs, schools and philanthropic bodies make it all possible.

We have much to achieve in 2015 with 10 children ready to come for life-changing surgery and a large number of cases in final review stage.  When considering your Christmas giving please think of the international and Australian children we support. We would appreciate your donation.  Please know that through your donations – whether financial or in-kind – you are living our mission of transforming lives with us.

The staff and Board of Directors join me in wishing you all a peaceful and joyous Christmas and holiday season.
Margaret Smith OAM