After undergoing major surgery in Melbourne twenty year Palestinian Ali Abu Sroor has returned home, now able to do things most of us take for granted.

Ali has a condition called familial hypophosphatemic rickets: it’s a hereditary disorder related to low levels of phosphate in the blood. Phosphate is a mineral that is essential for the normal formation of bones and teeth.  In 2013 Professor Donnan operated on Ali’s younger brother Motaz who has the same condition.  Having not seen each other for two years, the brothers spent a week together in Melbourne with Children First before Motaz returned home and Ali’s treatment began.

In Ali’s case bow legs were his most noticeable deformity. His lower legs were positioned at an outward angle, with knees together and his feet a metre apart. These abnormalities become more apparent with weight-bearing activities such as walking and if untreated they worsen with time.  His mobility was being dramatically compromised.

Ali’s surgery took five hours during which frames where attached to his thigh bones near the knees and the bone divided. “The deformity in his legs was corrected over a number of weeks using a computer program,” said Dr Donnan, “During this time bone was stimulated to form and realign his severely bent limbs.”

Ali then learnt to walk in the frames and once the bone was solid enough the frames were removed. 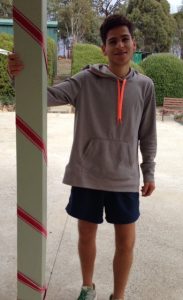 In consultation with Professor Donnan the physiotherapy team at St Vincent’s designed a program to suit his particular needs. Physio sessions began while wearing the frames, and continued when removed, and included swimming, regular walks carrying weights, and sessions to help flexibility in his knees and ankles.

Ali has worked hard because he had some goals: walking and running are priorities. Just as importantly he wants to be able to kneel for prayer, to kneel to enjoy a meal with his family in their customary fashion.  He wants to be able to board the bus so he can return to University – there’s no disabled public transport in Palestine.

Ali said he never believed doctors could make his legs straight: he thought ‘only God could do that’.

In a heartfelt farewell message, he wrote “…thanks to the amazing Professor Leo Donnan, wonderful volunteers, great physio team…thank you for allowing me to be part of this beautiful family…God bless you all.”