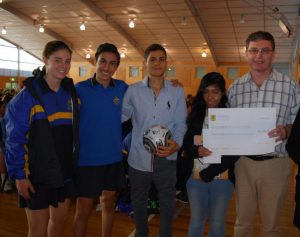 This amazing cheque was presented to Children First at the College Assembly where Theresa spoke of her experiences.  The 1260 students were spellbound as she told them of her burns and the treatment that followed. She finished by thanking them for helping her and other children. The donation will contribute to Theresa’s continuing treatment and care while she is in Australia.

Theresa, now 18, sustained dreadful burns from a kerosene spill when she was eight years old. She was left dreadfully scarred, with burns contractures that prevented her from lifting her head or raising her arms. 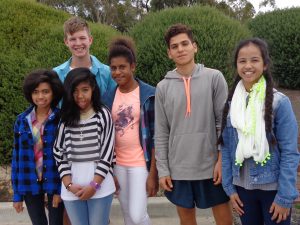 Children First brought her to Australia two years ago to undergo three operations at Concord Hospital in Sydney after she was referred by Interplast Australia & New Zealand. She then came to the Foundation’s Miracle sMiles Retreat in Kilmore where she continued many months of intensive physiotherapy under the guidance of the team at St Vincent’s Private Hospital.  Theresa is now able to hold her head high and lift her arms above her head, impossible before surgery.

Emmaus College Captains, Vice Captains and Social Justice committee visited the Retreat in April to meet Theresa and the other children in our care. They then led the ‘Emmaus Day of Action’ where students paid a fee to wear casual clothes and held food stalls at both campuses to raise money to assist Theresa. 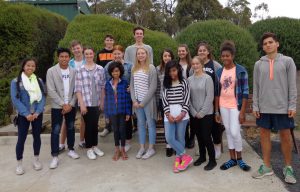 We extend admiration and gratitude to the students and College community for their ongoing commitment to supporting Children First.  Since 2013, Emmaus College students have raised in excess of $20,000 for children in the care of Children First.

No related posts were found.