As she prepares to return home to East Timor, Angela happily took time to pose for photos at Children First’s Miracle sMiles Retreat. 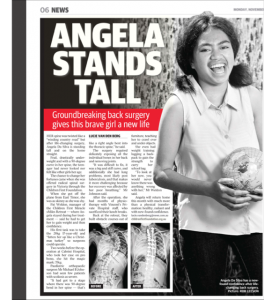 HER spine was twisted like a “winding country road” but after life-changing surgery, Angela Da Silva is standing tall and on the home straight.  Frail, drastically underweight and with a 90-degree curve in her spine, the teenager had never looked nor felt like other girls her age. The chance to change her fortunes came when she was offered radical spinal surgery in Victoria through the Children First Foundation.

When she got off the plane from East Timor, she was as skinny as she was shy.  Pat Weldon, manager of the Children First Miracle sMiles Retreat — where Angela stayed during her treatment — said he had to get her to gain weight and then confidence.  His first task was to take the 28kg 17-year-old and “fatten her up like a Christmas turkey” so surgeons could operate.  Two weeks before the operation at Cabrini Hospital, who took her case on pro bono, she hit the magic mark: 35kg.

Paediatric orthopaedic surgeon Mr Michael B Johnson had seen few patients with scoliosis as severe. “It had got to a stage where there was 90-degree bend in her spine — that’s like a right angle bent into the thoracic spine,” he said.  The surgery required delicately exposing all the individual bones in her back and removing joints.  “It was difficult to fix, it was a big and stiff curve, and additionally she had lung problems, most likely post tuberculosis, and that makes it more challenging because her recovery was affected by her poor breathing,” Mr Johnson said.

After the operation, she had months of physiotherapy with St Vincent’s Private Hospital staff, who sacrificed their lunch breaks.

Back at the retreat, they built obstacle courses out of furniture, teaching her to crawl over and under objects. She even had weight training: lugging a backpack to gain the strength to carry her school bag. “To look at her now, you would never know there was anything wrong with her,” Mr Weldon said.

Angela will return home this month with much more than a physical transformation : healthy, radiant and with new-found confidence. Lucie Vandenberg

Children First is grateful for the support of the Jack & Robert Smorgon Families Foundation which provided funds to sponsor Angela’s care while she underwent treatment in Australia.  Upon hearing of her preparations to return home Foundation CEO Mr Andrew Blode forwarded this heart-warming message:

“On behalf of the Jack & Robert Smorgon Families Foundation, we were delighted to be able to provide financial support for Angela’s care. We wish her every success and a bright future as she returns home to East Timor. In addition we would like to thank the Children First Foundation, and all the wonderful doctors and volunteers who performed a miracle and cared for this wonderful young girl”.