Choity has returned home to Bangladesh after world-first surgery in Australia.

Home > News > In the media > Choity has returned home to Bangladesh after world-first surgery in Australia.

Herald Sun Transcript
A Bangladeshi girl born with three legs and conditions never seen before is set to return home after treatment that still amazes her Melbourne surgeons and carers. 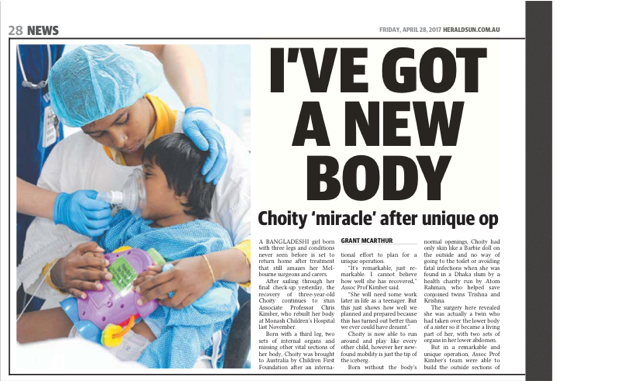 After sailing through her final check-up yesterday, the recovery of three-year-old Choity continues to stun Associate Professor Chris Kimber, who reqbuilt her body at Monash Children’s Hospital last November.

Born with a third leg, two sets of internal organs and missing other vital sections of her body, Choity was brought to Australia by Children First Foundation after an international effort for a unique operation.  “It’s remarkable, just remarkable.  I cannot believe how well she was recovered,” Assoc Prof Kimber said. “She will need some work later in life as a teenager. But this just shows how well we planned and prepared because this has turned out better than we ever could have dreamt.”

Choity is now able to run around and play like every other child, however her newfound mobility is just the tip of the iceberg.  Born without the body’s normal openings, Choity had only skin like a Barbie doll on the outside, and no was of going to the toilet or avoiding fatal infections when she was found in a Dhaka slum by a health charity run by Atom Rahman, who helped save conjoined twins Trishna and Krishna.

The surgery here revealed she was actually a twin who had taken over the lower body of a sister so it became a living part of her, with two sets of organs in her lower abdomen.  But is a remarkable and unique operation, Assoc Prof Kimber’s team were able to build and then reconstruct her internal organs so successfully that she can not only function like any other child, but will be able to one day become a mother.

With her recovery exceeding all expectations, foundation spokesman Pat Weldon said she was now ready to return home to a full life including school.  “It is amazing to see her because she looks just like a little toddler,” he said.

“Now she is running around the way any other toddler would.  She is probably the happiest kid you could ever meet in your life.” grant.mcarthur@news.com.au